I LOVE a challenge.  I LOVE to have nothing on my agenda, and find myself blessed with recipe requests from friends and followers alike.

This week, I was asked to create a few recipes for Holly S.  -- a follower and an Old high school Friend.   And when I say an old friend, times have taken us apart, and though miles in distance we still share a passion for good healthy eats!

Now, I thrive for this, and so when the requests came in I seriously jumped for joy!
This is weird, I know, but my brain is wired to create recipes from scratch that I often am able to create, visulaize, and taste without even starting.  Being a vegetarian I often don't have the chance to try my finishes meals, so I have tons of parties and dinner get togethers..... but then that's another story ;)
And so the task Holly gave was a tall order to fill:  To stick to a budget and a Low fat theme, and create recipes for the following:
For Today's Recipes Only, click here:
Healthy Chicken Tikka Masala
Healthy Whole Wheat Naan
So let's talk about it.  Tikka Masala is often prepared with heavy cream and many spices.  It is often grilled, and is an absolutely delicious, hearty, and flavor rich dish that, believe it or not, has found it's way to the top of many popular dishes in of all places, British cuisine. But I will attest that there is amazing indian food influence in Britain... and it's awesome!


It is of course an Indian dish, but the recipes and twists on it differ so much from restaurant to restaurant, that the meal is almost like a chameleon -- it changes to fit it's surroundings.

Today I will experiment with a recipe I thought up, using plain greek yogurt for health and protein, boneless skinless chicken breasts for  low fat reasons, and no heavy cream but instead lite coconut milk.  I know, it's one hell of a ambitious recipe... but that's just how my brain works ;)
Naan is by far one of my favorite breads of all time.  It is very persian, has found itself into Indian cuisine, and there are so many types of naan you can't just say one is better than the other.  My favorite thoguh is Parantha, which is of Indian background.

My husband and I are super obsessed with making everything Naan:  Naan pizzas, naan chips, naan tacos!  "There ain't naan we can't do with it!"

So today I want to make an unbleached whole wheat flour naan, but I will not be pan-frying it like my favorite parantha is.  Sadly I will sacrifice this step and instead lightly dry pan "fry" the dough to create a light, fluffy, oil-less bread.  So as to not compromise the flavors of naan, I will add a few hints of spices... because you can't forget to flavor the flour and you certainly can't just serve leavened wheat flour and call it naan!


And so I went to the store, picked up a few last minute items and began my brainstorming.  Note, while the recipes looks long in ingredients, I made it so they are repetitive throughout, to simplify the meal! 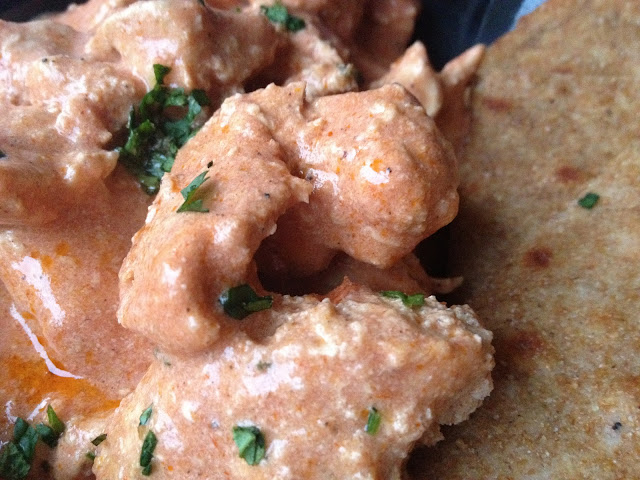 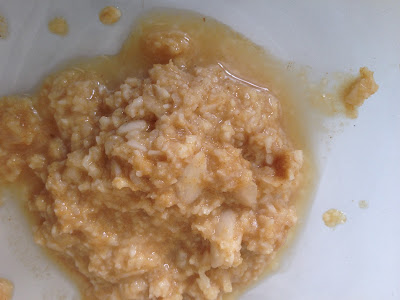 Scrape the paste into a mixing bowl, and stir in the remaining marinade ingredients (except for the chicken). 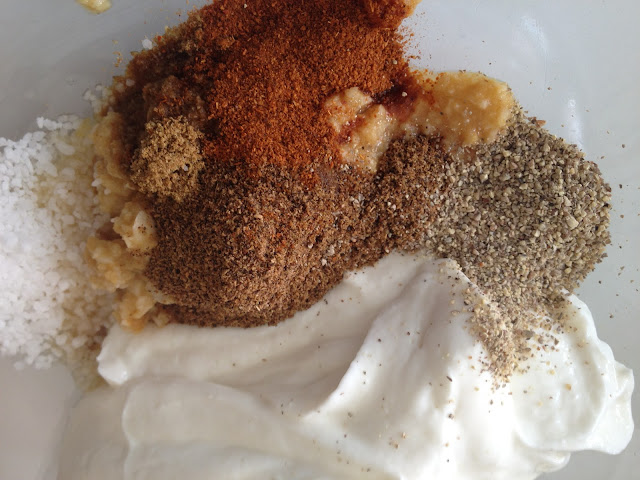 Once combined, fold the chicken into the bowl with the marinade and refrigerate for 30 minutes, or for best results over night.  (Quorn Brand Vegetarian Chicken works AWESOME with this meal.  Buy the diced kind) 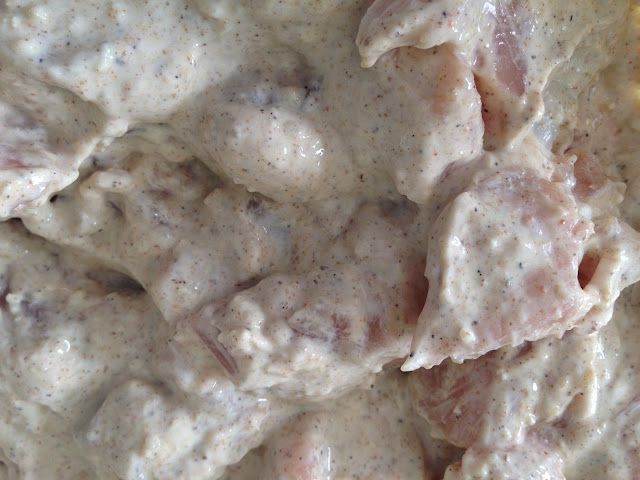 Now is a point to think "Do I want to Bake or Grill my Chicken Tikka Masala?".  I think either or, its fabulous, and let the weather pick for you.  If you want to grill it, don't dice the chicken before marinading or have fun with it and skewer the chicken to make little kebobs.  In fact, you can bake the chicken on skewers if you want -- you know I never hold back from alterations to my recipes!
I baked this recipe for the sake of my toes (20 degree day today).  Either way, the sauce goes as follows:
Using the cooking spray, spray a sauce pan generously, and saute the garlic, shallot, and jalapeno for about 1-2 minutes.  Next, add the lemon juice and cook 1 more minute.

Now it's time to whisk in the coconut milk, lemon juice, tomato paste, yogurt, cream, and spices and bring to a simmer.  At this point you can add the grilled chicken to a 9X13 baking pan, cover with the coconut sauce and bake.

To bake without grilling the chicken first, add the chicken (with all the marinade) to a greased over safe skillet.  Cook this for only about 3-5 minutes, just to start heating up the skillet.  Next, add the simmering sauce and stir it into the chicken.  Finally cover the skillet with aluminum foil, and bake at 350 degrees for 45 minutes. 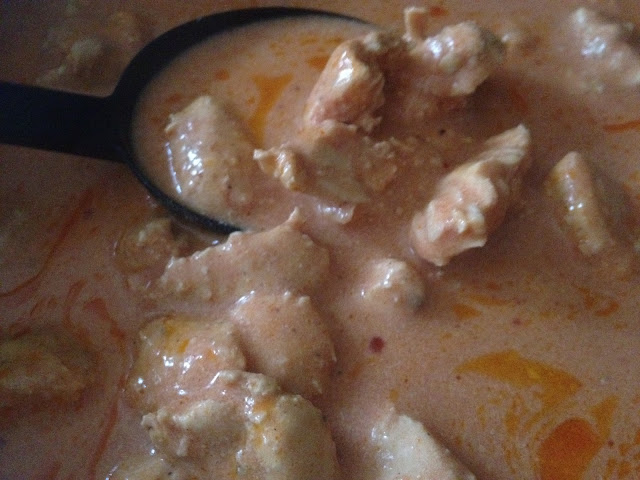 Grilling would add a smokey element, so f you are baking, I encourage you mix in 1 tsp smoked paprika to the sauce.  But you don't have to, just a thought ;)
When done, you can serve this alone, or over a grain.  I use Quinoa (because it's awesome and what Holly wanted! -- I wish she were closer to Utah, I could have shared this with her physically).
No matter how you serve it top the tikka masala with a pinch of freshy chopped cilantro and mint.
Man oh man this is so good!  I made a tofu version for myself out of jealousy, because my huband was going to super well fed tonight!

Next up to plate (pun intended!) my variation on Naan with Whole Wheat Flour! 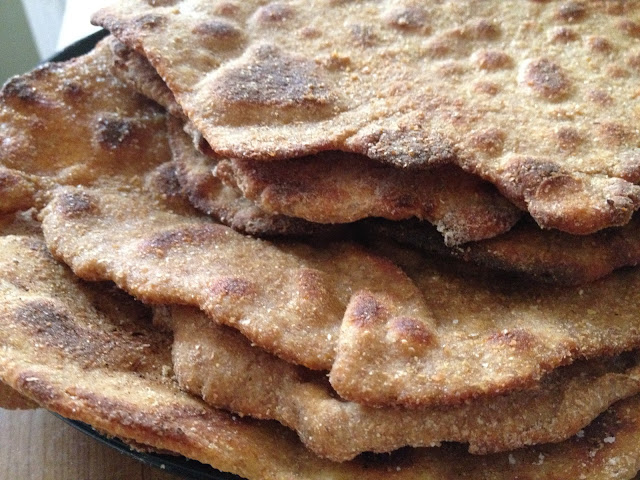 Simple Healthy Whole Wheat Naan
What You Need:
2 1/2 cups Whole Wheat Flour + flour for rolling
2 tsp Dry Active Yeast
2 tsp Salt
1 tsp Sugar
1/8 tsp Baking Soda
1 tbsp Cooking Oil
Butter Flavored Cooking Spray
1 1/2 cups Plain Greek Yogurt (or dahi if you want to make it)
1 cup Warm Water
Secret Optional Spices
1/4 tsp Cumin
1/4 tsp White Pepper
To start, activate the yeast by adding the sugar and warm water to a bowl, and stirring in the dry active yeast.  This will need to sit for 10 minutes.  I like to cover the bowl with a wet paper towel to lock in the temperature and kick start the yeast.
While the yeast is sitting to activate, you can start the rest of the recipe.  In a large mixing bowl add the flour, baking soda, and salt.  Mix well.  Next, add the oil and yogurt to the flour.  This will crumble the dough.  If using the curd or "dahi" the dough will crumble a bit more than the greek yogurt, but for the sake of a simple recipe, I used the greek yogurt and it looked like this: 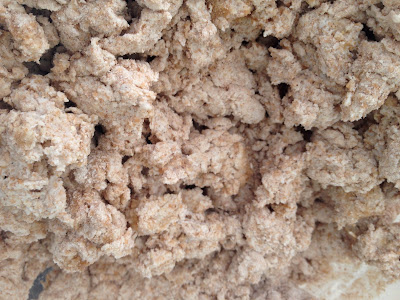 Now you can add in the water and yeast mixture and if desired my secret optional spices.  This will soften the dough a bit, relaxing the crumbled mixture.  Knead the dough for 2-3 minutes, or until smooth then sit aside for 3-4 hours in a warm place. 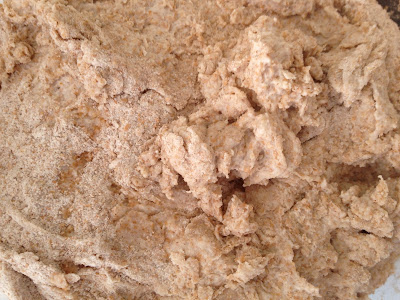 I know that is a large chunk of time and Bargain Bites loves to cut corners, but music, talking, and even jokes won't speed up the yeast.  If you really want to try to speed it up, I have found that this works from time to time:   Place a pan of water on the lower rack in your oven.  Heat the oven to 180 degrees then shut off the oven.  Place the dough in an oils dish, covered with a wet towel, onto the top rack.  Let this become a proofer to help rise the dough.
At any rate, when your dough is risen it's time for some bread!  Heat the oven to 500 degrees fahrenheit with either a tandoor or pizza stone to 500 degrees.  If you do not have either of these, most people do not, you can use a baking sheet.  In this case keep the oven at 450 degrees. For the sake of simplicity I used a baking sheet.
While heating up, it's time to roll out the naan!  You can choose your size and shapes, just be sure to flour your surface before rolling, as well as the rolling pin and dough.  This is a soft recipe, so it will stick without proper flouring. 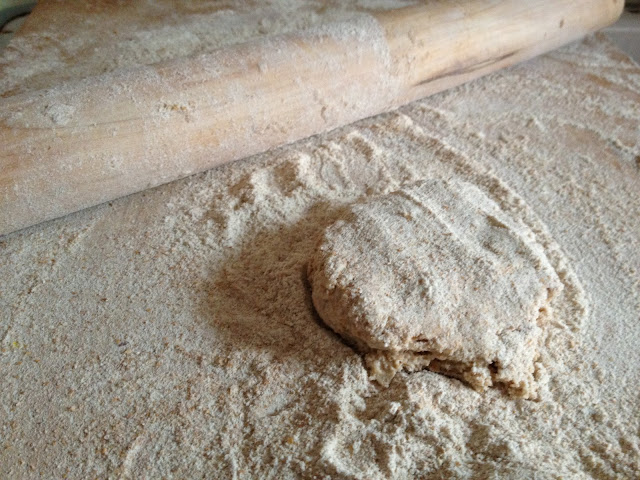 And so wraps up a day of adventure and challenge.  What started off as a day with hunger, ended in a healthy feast with my husband and Holly's requests.


I hope everyone has a wonderful week ahead!
Best, 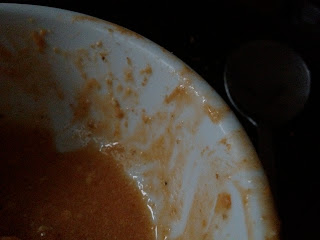 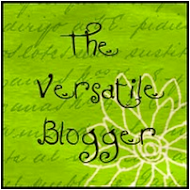